Rogue Fitness is the official equipment supplier for the CrossFit Games.

The CrossFit Games are the world’s premier test to find the Fittest on Earth™. They are world-renowned as a grueling test for the world’s toughest athletes and a thrilling experience for spectators. Since its inception in 2007, the CrossFit Games have become “one of the fastest growing sports in America,” according to Forbes.

ZEUS
The Rogue ZEUS made its impressive debut at the 2015 Games. Hundreds of man hours were put into the design, production and assembly of this massive rig. ZEUS extended the entire width of the soccer stadium and was at the center of several events throughout the weekend.

Rogue Barbells and Competition Plates
Competitors at the 2015 CrossFit Games used much of the same equipment available every day from the Rogue catalog. This included the flagship Rogue Ohio Bar and Women's Bella Bar—both featuring 190,000 PSI tensile strength steel, dual knurl marks, and quality bronze bushings—as well as the Men's and Women's Olympic Weightlifting Bars, recognized among the best American-made bearing bars in the industry. The Games also saw the use of Rogue's distinctive Competition Plates—dead bounce bumpers with a zinc-plated steel insert and 50.4mm collar opening for a secure hold and maximum durability.

Climbing Ropes
Rogue’s American-made climbing rope offers the same reliable grip and durability that’s made the classic manila rope a staple of military bases and shipyards for decades. This 1.5” diameter rope was featured in the legless rope climb portion of the “Soccer Chipper” event at the 2015 Games. It includes a braided eyelet and is designed for indoor/outdoor use. 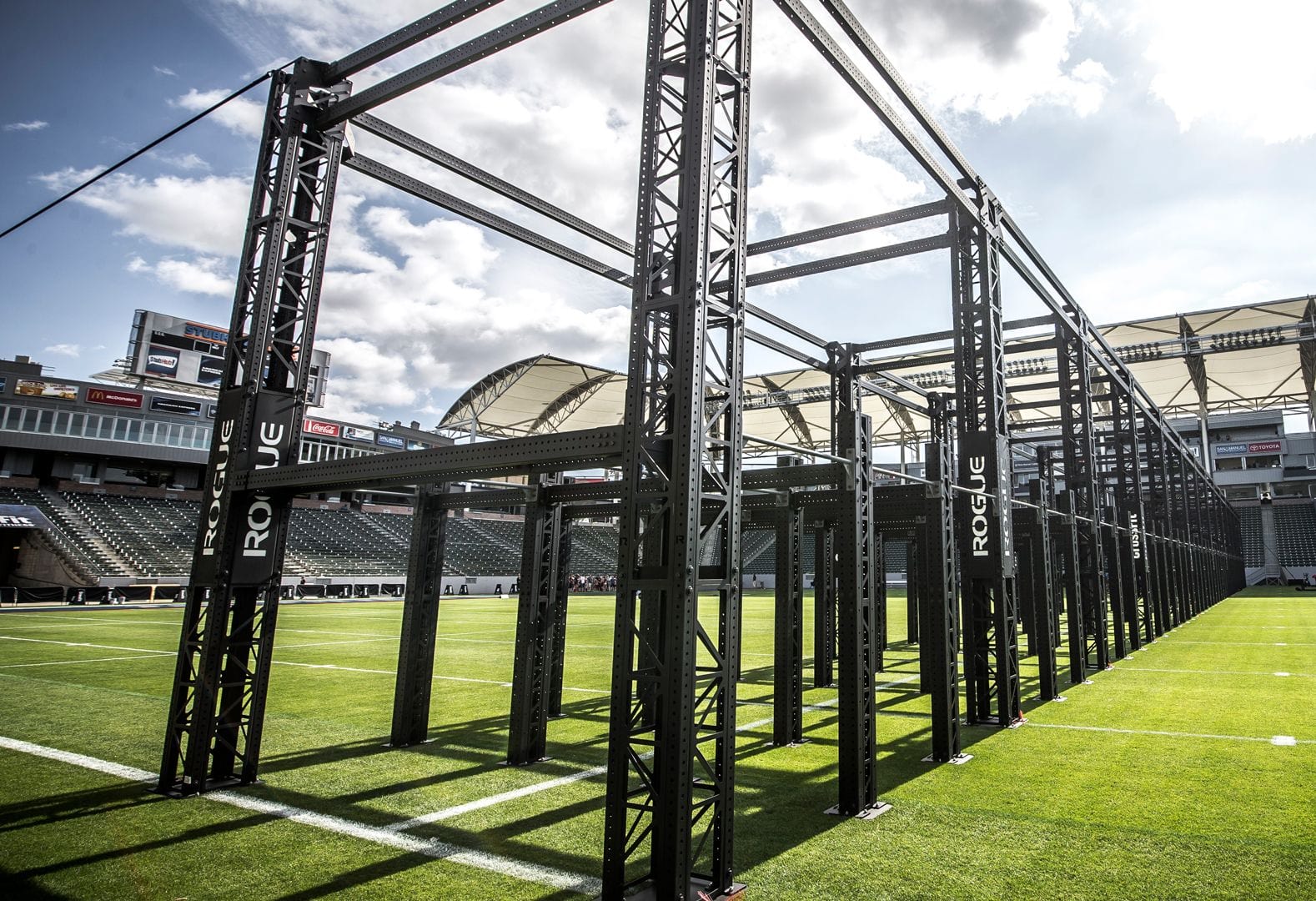 The Pig 2.0
Version 2.0 of “The Pig” made its 2015 Games debut at Saturday’s “Soccer Chipper” event, as athletes had to flip the 7-feet tall, 560 LB monolith a distance of 100 feet (the weight was 395 LBS for the women). The new Pig looks a little friendlier than the original model, with its high-density foam exterior. But make no mistake—this modern take on tire-flipping was one of the most grueling challenges at the Games.

Rogue WheelBarrow & Sandbags
Manufactured from 250 LBS of steel and over-engineered for the highest level of competition, the Rogue Wheel “Bear” Row carried 700 LBS worth of sand bags during the 2015 Reebok CrossFit Games, and we've tested its capacity at more than 1,200 LBS. The sandbags themselves feature a 1000D MIL Spec Cordura construction and are individually sewn in Columbus, OH.

Rogue Monster Bells
Used during the Midline March event, this new bar & plate combination made its debut at this year's Games. For the men, the 35LB C-70 Bar was paired with two blue weight drums weighing 60LB each (155LB), while the women used a 25LB C-63 Bar with a set of yellow 45LB weight drums (115LB). The new, streamlined look took center stage as Annie Thorisdottir grabbed first place on the women's side, while Rich Froning won the event en route to another overall title in the men's division.

The Slug
As seen during the “Weighted Lunge” portion of the Team Chipper event, the Slug is a slightly smaller version of the infamous Rogue Worm. Measuring 11 feet in length and 11 inches in diameter, this hand-sewn, tear-resistant cylinder can hold up to 300 pounds in filler material (225 pounds in the 11’ x 10.5” women’s version). It’s designed to be carried by three athletes working together—no easy task with an uneven distribution of weight.

Big Bob
Debuted at the 2012 Games, Big Bob has become a popular staple of the team competition—though not always popular with the athletes themselves. Designed as a cross between a bob sled and a football sled, the Big Bob is a massive contraption weighing 800lbs unloaded. During the “Big Bob Drag Race” at the 2015 Games, all team members had their own push bar on the unit and had to work together to push and pull the sled down a 150-foot course.

Assault AirBike
Used during the “Pedal to the Metal” event on the last day of the Games, the Assault Bike is an innovative, resistance fan bike with a heavy-duty steel frame, reinforced pedals, sealed cartridge bearings, and a comfortable hybrid seat. The LCD screen on the bike covers watts, distance, time, and calories burned (athletes at the Games had to reach 16 calories before moving on).

Rogue Paralettes
To begin the final event of the 2015 CrossFit Games, athletes had to complete 12 handstand push-ups on a set of Rogue Parallettes. Measuring 23”L x 14”W x 12”H, these 11-gauge steel gymnastic apparatuses can support any weight and won’t shift under pressure. Proudly made in America and finished with a rough, textured black coating for a firm grip.

Rogue Medicine Balls
Individually constructed, stitched, and tested at our manufacturing facility in Columbus, Ohio, Rogue Medicine Balls are trusted by the top Crossfitters on the planet for high-speed, high-intensity training. Each 14” diameter ball features a flexible but durable nylon thread seam construction with a moisture and scuff resistant coated vinyl shell. The interior filling is substantial enough to help the ball keep its shape through repeated smashes, but also forgiving enough for athletes to safely stop or catch the ball at high velocity.
Athletes 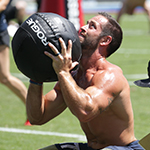 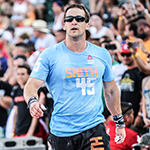 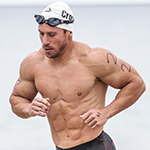 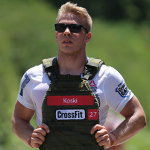 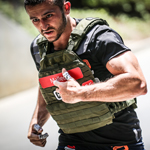 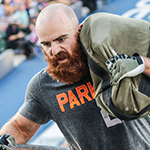 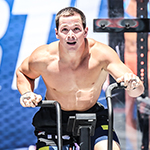 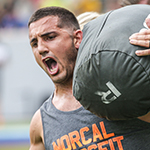 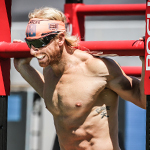 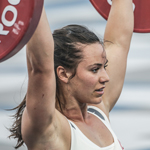 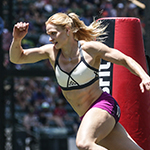 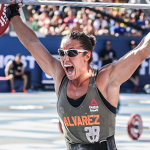 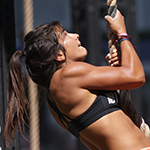 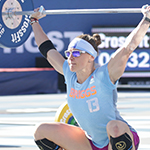 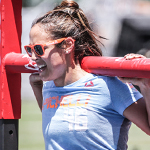 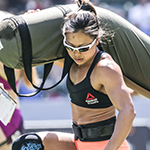 
Full 2015 CrossFit Games Stats
History of The CrossFit Games
“The goal is to find the fittest athletes, not produce an easily replicable workout program.”
Back to Rogue Equipped Events