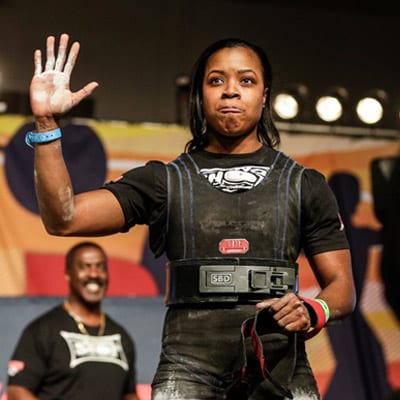 Pound for pound, she ranks among the greatest American powerlifters of all time, regardless of gender. And in her early 40s, there is zero indication that Kimberly Walford is slowing down. The New York City native and Rogue athlete is a 7-time IPF World Champion. As a teenager, Kimberly initially got into lifting as part of her overall training as a versatile track-and-field athlete. “My high school coach told us he not only wanted us to be fast, but strong,” she says. “From the moment I touched the weight I was hooked, and I continued strength training throughout high school and college.”

While she was reluctant to enter into competitive powerlifting at first, her first victory in a bench press event spurred her on from that point forward, as she followed a simple mantra: Hard work equals results.

In January 2020 at the Reykjavik International Games in Iceland, Walford showed she is still at the absolute top of her sport. She set the new deadlift world record for the IPF Open and Masters at 244kg in the 72kg weight class—this broke her previous deadlift record of 243kg that she set two years prior.

Pound for pound, she ranks among the greatest American powerlifters of all time, regardless of gender. And in her early 40s, there is zero ind...

This edition of the Iron Game looks ahead to Day Two of the 2020 Rogue Invitational, as Sean Woodland, Chase Ingraham, and Margaux Alvarez dis...

Once the professional strongmen were done with the Rogue Elephant Bar, the heaviest deadlifts of the Arnold Sports Festival took place on Sund...

It is not an exaggeration to call Kimberly Walford the best female American powerlifter in history — her list of records and accomplishments b...

Pound for pound, she ranks among the greatest American powerlifters of all time, regardless of gender. And in her late 30s, there is zero indi...