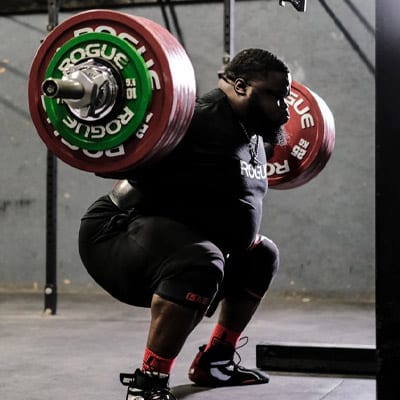 No one puts on a show quite like Ray Williams. Since emerging seemingly out of nowhere in 2013 at the age of 26 (he squatted 905 LBS in his second-ever competition), this junior college football coach and father of three has quickly excelled from phenom to legend status in the sport of powerlifting.

Williams (aka “Ray Ray” and “Optimus Prime”) has won five straight IPF Classic Raw World Championships in the Superheavyweight division, along with four consecutive titles at the Arnold Pro American in Columbus, Ohio—where he’s become something of a cult hero. After casually squatting a ridiculous 1,069 LBS in front of a stunned crowd at the Arnold in 2018, Williams bested himself in 2019 with a new U.S. Raw record 1,080 LB (490 KG) squat; then tacked on a career-best 545 LB bench press en route to a record 2,452 LB (1,112 KG) combined total for the competition.

Despite how effortless he can make things look with a barbell, the 6-foot, 400 LB Williams has never faced an easy road in life. From a difficult childhood in Alabama through finding his calling in football and strength training and earning his college degree, Ray had to see potential in himself where many others couldn’t. This self-made spirit, along with a natural Southern charm, has helped the record-breaking powerlifter connect with many fans in and outside of his sport. “When you come from nothing,” he says, “and you finally get the opportunity to make your dreams come true, you put everything you can into it.”

This edition of the Iron Game looks ahead to Day Two of the 2020 Rogue Invitational, as Sean Woodland, Chase Ingraham, and Margaux Alvarez dis...

No one puts on a show quite like Ray Williams. Since emerging seemingly out of nowhere in 2013 at the age of 26 (he squatted 905 LBS in his se...

It was one of the breakout highlights of the 2018 Arnold Sports Festival: powerlifter Ray Williams (aka “Optimus Prime”) squatting 1,069 LBS i...

RESEARCH Rogue Work Hardening™ and the F Scale™ Rogue has spent the last 5 years and over $2,000,000 in scientific testing, research, and de...

That’s a wrap. The 30th Arnold Sports Festival drew hundreds of thousands of spectators from around the world to downtown Columbus for a full...