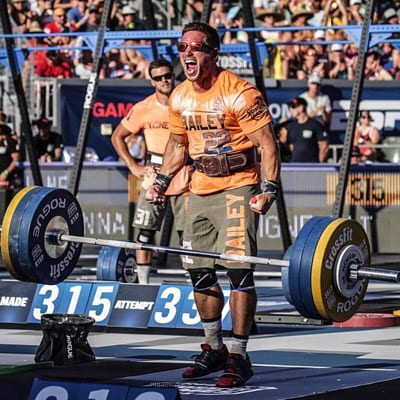 From 2011 to 2015, Dan Bailey made five CrossFit Games appearances and posted five Top 10 finishes. That’s the consistency of a world class athlete, and Bailey—the 2015 “Spirit of the Games” award winner—certainly fits that description.

A former track and field standout at Ohio University, Bailey was introduced to CrossFit while studying for his master’s degree at the University of Akron in 2010. Finding a new outlet for his drive to compete, he soon became an annual presence at the Central East Regionals, reaching the podium each year from 2011-2013. In 2014, when his professional life forced a move to San Diego, Bailey didn’t skip a beat—reaching the podium at the SoCal Regional that year and taking first place at the California Regionals in 2015. Sadly, a series of injuries have kept Dan largely on the sidelines in recent years, but the spotlight found him again in 2019, highlighted by a podium finish in the Legends division of the Rogue Invitational, and a new gig as an analyst on the Rogue Iron Game show.

As a longtime Rogue athlete—dating back to his Ohio days—Dan Bailey remains a proud ambassador for the brand. His own Rogue Signature Series products include the official “Clang-N-Bang” t-shirt.

Dan Bailey is no stranger to operating under pressure. Watch as the Rogue Athlete centers himself before a 305 lb. lift during the Clean and J...

The 13th edition of the CrossFit Games is in the books, and while fans were able to follow the action in more ways and in more depth than ever...

Following the Team and Individual “Swim Paddle” event at the 2019 CrossFit Games, the Rogue Iron Game breaks down the fallout and...

The fourth and final day of the 2019 Reebok CrossFit Games begins with the Swim Paddle event in both the Individual and Team competitions, pre...

Complete coverage of the Team, Individual Men’s, and Individual Women’s Sprint events from Day Three of the 2019 Reebok CrossFit G...