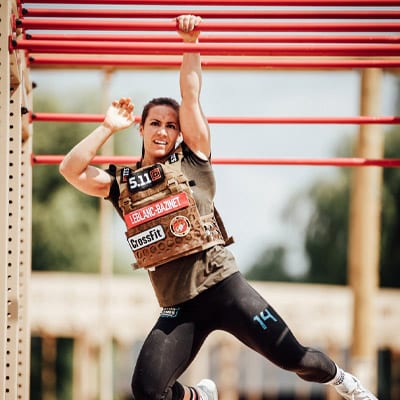 The rise of Camille Leblanc-Bazinet from teenage gymnast to “Fittest Woman on Earth” would only have surprised those who weren’t paying attention. Since her competitive CrossFit debut back in 2010, the Quebec native made a habit of dominating the Canada East Regionals and making waves at the Games, where she picked up three Top 10 finishes in her first four years. In 2014, everything came together, as the 5’2” Leblanc-Bazinet showed off her much improved weightlifting prowess en route to her first Reebok CrossFit Games title.

In total, Camille has now appeared in 10 straight CrossFit Games; the first nine in the individual ranks, and the most recent, in 2019, as a member of the runner-up squad in the team competition, CrossFit Krypton.

Now based in Boulder, Colorado, Leblanc-Bazinet has a chemical engineering degree to go along with her work as a trainer and workout programmer. She is part of a spirited, athletic family, including three siblings with competitive CrossFit experience, as well as her husband—CrossFit coach and trainer Dave Lipson. CLB’s exclusive Rogue Signature Series products include the “Jacked Unicorn” t-shirt and official “Camille” medballs.

The rise of Camille Leblanc-Bazinet from teenage gymnast to “Fittest Woman on Earth” would only have surprised those who weren’t paying attent...

As the sun began to dip below the Pacific coastline the lights came on in the Home Depot Center, working towards the last heats of the first w...

Rogue Athlete Camille Leblanc-Bazinet has stood at the top of the Crossfit world looking down. But the 2014 Reebok Crossfit Games champion isn...

Camille LeBlanc Bazinet — “When you want something, you always find a way”

Rogue Athlete Camille LeBlanc Bazinet proved in 2014 that she was the fittest woman on the planet. But, as she explains in this profile, she&#...

Week 2 of the CrossFit Team Series competition brought both of Rogue’s competition teams to Rogue HQ for the week. Rogue Team Red (Graha...

Week one of the 2015 CrossFit Team Series brought Rogue Team Red to Columbus for two days. After the first four workouts of the event, Team Re...

In the final week of the Crossfit Games Team Series event, Rogue teams Red and Black came to Columbus, OH to complete the workouts at Rogue HQ...